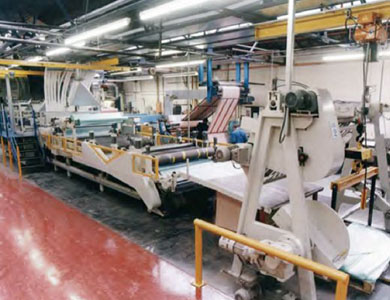 Sheet dimensions are normally 4mm thick and 1,500mm wide. The length and weight of the SMC sheet is determined by moulder preference for handling and is usually stored on a 350kg (standard) up to 1500kg rolls or bi-folded (like computer paper) into large bins. Modern SMC production is a highly automated and computer regulated process. Before the SMC can be used for moulding it must mature. This maturation time is necessary to allow the relatively low-viscosity resin to chemically thicken. The SMC will be kept in a maturation room at a controlled temperature (normally 48 hours at 30°C) and typically requires two to five days to reach the desired moulding viscosity. Usually SMC has a shelf life ranging from several weeks to several months from the date of manufacture. The time frame can be extended or reduced depending on the SMC formulation and storage conditions. A storage temperature of no higher than 20°C is recommended.

Like SMC, DMC is a fibre reinforced composite material which primarly consists of a amalgam of thermosetting resin, chopped glass fibre reinforcement and filler in the form of a bulk material. Additional ingredients such as low profile additives, cure initiators, thickeners and mould release agents are added to enhance processing performance. DMC is less loaded with glass fibres than SMC and fibre length is shorter at 6 to 12mm. Filler loadings are higher than for SMC. There are several techniques for the batch production of DMC. The most common mixing process involves a Z-blade mixers which amalgamates the resin paste, fillers, additives and reinforcements into a mass material with a dough-like consistency. The bulk product is packed in plastic bags impermeable to styrene diffusion and supplied in bins. Like with SMC, it can be supplied in pre-weighed charges according to customer needs.